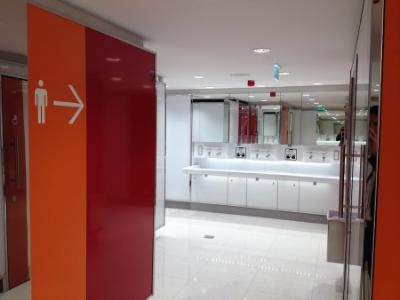 The Danish company DAN DRYER A/S is among the finalists for a five-year contract with Aéroports de Paris and the company will exhibit at the world’s leading airport terminal trade fair Passenger Terminal EXPO 2016 in March.

Over the past three years, DAN DRYER A/S has been the exclusive supplier of toilet equipment to the Parisian airports Paris-Orly and Paris-Charles de Gaulle. More than 7,800 products have been installed and the architectural division at Aéroports de Paris has been so happy with the collaboration that they have invited the Danish export company to submit tender for a new 5-year contract.

- A huge order like this is extremely attractive, and in addition it can help bring in new customers, says CEO Susanne Friis Eden.

- An international nerve centre for a great number of business people is a great showroom for our products. Quite many people on the journey have actually decided to buy our products because they have recognized our hand dryers with the well-known Viking logo.

DAN DRYER is also represented at other airports such as Stockholm-Arlanda in Sweden and Larnaca International Airport in Cyprus.

The strong presence at the international airports has taken the Danish company to a higher international level and it thus makes good sense that DAN DRYER has decided to exhibit for the third time at the world’s leading airport trade fair “Passenger Terminal EXPO” from 15-17 March in Cologne.

The products installed at the Parisian airports count all from TURBO hand dryers to soap and disinfectant dispensers in stainless steel.

- We strongly believe that we win orders because we focus on quality instead of cheap solutions, says Friis Eden and refers to DAN DRYER's new product line BJÖRK that was awarded the prestigious Red Dot Design Award in the spring of 2015:

- Gradually, international architects have caught eye of our company. Bearing in mind that we must continue to secure sharp prices we are regularly negotiating lower prices from our suppliers. But first and foremost we sell strong, beautifully designed products. We are trustworthy, reliable and stable. And we deliver customised solutions.

Ever since the early beginning in 1980, DAN DRYER has been recognized as a successful export company with proud traditions. During recent years the product range has been increased and today DAN DRYER has established a leading position as supplier of toilet equipment to airports, public institutions, retail chains and the rail industry.

In recent years the company has been awarded a number of prestigious prices. In addition to the Red Dot Design Award, the company is a former nominee to “Danmarks Eksportkanon”, a directory of the top 30 Danish exporters and in 2015 the Danish company was awarded a Gazelle prize.This award is given every year to companies achieving high growth.

At DAN DRYER we are specialists within design, development and production of aesthetic and functional washroom equipment for public toilet facilities throughout the world.

We are solution-oriented company and a preferred supplier of sanitary equipment to major projects in e.g. airports, public institutions and retail chains.